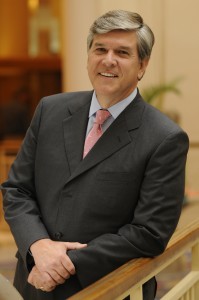 US broadcasters must take on the threat to their spectrum, which is coveted by wireless operators, and urgently develop a new standard that will allow free over-the-air broadcast to prosper in the multiscreen world, according to Gordon Smith, president and CEO of NAB, and Haim Saban, chairman of Hispanic broadcast giant Univision Communications.

Leading the opening session of the NAB Show in Las Vegas, Smith said that while convergence of broadcast and broadband is “a game changer”, broadcasters are “uniquely tied to the people they serve” and “serve a public interest”. Broadcast is “always available for free” and “there is no substitute for broadcasters’ dedication to localism”, he said.

Smith said that the wireless industry covets broadcasters’ spectrum in order to use it to deliver video.

He said that broadcasters currently face mixed messages from the Federal Government, which has invested millions of dollars in a broadband plan for the cable and wireless industries. The FCC has looked to foster investment in broadband while continuing “to treat broadcasters like we are stuck in the 1970s”, said Smith.

Smith said government needed to remove barriers that would enable broadcasters to be competitive. The Federal government and regulators need to come up with a “national broadcast plan” and update regulations, for example, covering the sharing of advertising between local broadcasters, he said.

“A national broadcast plan would capitalise on broadcast TV’s one-to-many architecture. This enquiry is critical. If consumers want access to large live events broadcast must be a part of the solution,” he said.

Smith said that the US Federal Telecommunications Act needed to be looked at again to give more freedom to broadcasters and argued that the latter could serve as a necessary check on the power of large cable and wireless companies.

Referring the the FCC’s plan for an ‘incentive auction’ whereby broadcasters would be incentivised to relinquish their existing spectrum in exchange for less desirable spectrum with a smaller coverage zone, or to share a digital channel with another broadcast licence holder, thereby allowing more capacity to be freed up for wireless broadband applications, Smith said that those on low incomes, minorities and senior citizens would be disenfranchised if spectrum is allocated to wireless in the future.

“Ours is the only industry in the incentive auction that can end up worse off,” he said. He accused the FCC of double standards, on one hand preventing broadcasters from forming partnerships to sell advertising while on the other encouraging them to share bandwidth. “Recently the FCC ruled against sharing arrangements between two broadcasters in the same market. At the same time the FCC is pushing broadcasters to channel share to reclaim more spectrum to auction off,” he said.

Smiith said broadcasters were finding it hard to trust the FCC, even after it had followed the rules. “The FCC must work collaboratively with broadcasters,” he said.

Smith said greater progress must be made in the US towards a new broadcast transmission standard to enable them to adjust to the changes taking place and find new revenue streams from multiscreen delivery and the convergence of broadcast with broadband. The US broadcast standards body, the ATSC is currently working on two versions of its standard, ATSC 2.0, which would enable new service to be implemented in a way that is backwards-compatible with existing transmission equipment, and ATSC 3.0, which will involve a move to next-generation compression systems and will not be compatible with existing equipment.

Interviewed by Smith as part of the opening keynote session at NAB Show, Haim Saban, chairman of Univision Communications, agreed that it is vital for the broadcasters to develop a transmission standard that allows them to deliver to all platforms all of the time. He said it is important for the ATSC to develop a new standard or “free broadcasters will be left in the 20th century”.

“It’s not an option,” said Saban. “There are some complexities and investment requirements but it is vital for us to deliver that signal and to have a new transmission standard. The people who work on this have their marching orders – make this freaking happen!”

Saban said Univision is “the home away from home” for a community of Hispanic viewers and that brand loyalty is key to Univision’s success. He said there is a significant gap to fill between the advertising rates secured by Univision and English-language networks that gives the company room for growth. Retransmission fees have also provided a solid revenue stream, and Univision has benefited from Hispanic demographic growth, he said.

Saban said Univision now provides 16 services and has invested in content, infrastructure and technology. He said the next step would be to offer content ubiquitously.

During the opening NAB Show keynote session, Jorge Ramos, news anchor at Noticiero Univision was awarded the NAB Distinguished Service Award. He said he was “humbled to be the first Latino to win this award” and that this was “a sign that the country is changing”. Ramos highlighted the fact that while there were 15 million Latinos in the US at the start of his career in 1983, there are now 55 million.

Univision is now the number one Hispanic network in the US and one of the top five broadcasters in any language.