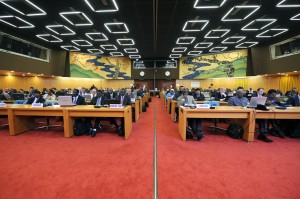 WRC-15 will discuss opening out more spectrum to mobile applications

The European Broadcasting Union (EBU) has criticised claims made by the mobile telecom industry regarding future bandwidth demands in the run-up to next year’s World Radiocommunication Conference in 2015, where the reallocation of the 700MHz spectrum, currently used for digital broadcasting, is on the agenda.

The EBU, in a new paper written by Roland Beutler of SWR and Darko Ratkaj of the EBU, places mobile spectrum requirements put forward in the ITU-R M.2290 report, which serves as the basis for the mobile industry’s request for more spectrum to be opened up to mobile use, under the microscope.

The authors say they have identified a number of errors in the report that led to a significant overestimation of mobile spectrum requirements.

Pointing out that the ITU report is an update of earlier estimates of likely future spectrum demand, the authors of the EBU paper say that “some input assumptions [in the new report] appear to be arbitrary and unrealistic”.

In particular, they point out that a subsequent study has shown that “spectrum requirements are determined by traffic density in a given area rather than by an aggregated traffic volume” and that “the ITU model overestimates the mobile traffic density by a factor of 100 or more when compared with those which would normally be expected in urban and suburban areas of any developed or developing country in 2020, leading to greatly exaggerated spectrum requirements”.

Other errors identified include the absence of any consideration of geographical variations and the relationship between mobile networks’ configuration and overall capacity. The report fails to take into account that most audiovisual content is consumed off-network via WiFI and that growth in demand for video is likely to follow this pattern, the authors say.

The paper points out errors in assumptions about data rates for video consumption and user densities, and criticises the mathematical model used for estimating growth in demand.

The authors also say that no cost-benefit analysis or impact assessment on the present users of the spectrum has been provided in the report.