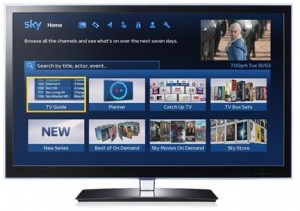 Sky is rolling out a new homepage for its Sky+HD boxes, in what it claims is the “most significant shake-up” to Sky’s EPG since its introduction at the launch of digital TV in 1998.

Sky said that for the first time, On Demand and Catch Up TV, the Sky Store and the Sky+ planner will all sit alongside the regular channel listings “as equal options” on the homepage.

The revamp launches today, though more updates are due to roll out to Sky+HD customers later this year aimed at making it easier for viewers to discover content – including smarter recommendations based on Sky+ Planner recordings and downloads.

“With so much fantastic TV on offer, we know it can sometimes be difficult to decide what to watch. Our new Homepage means it’s now much easier to quickly find what you want, when you want to watch it – whether that’s the big Premier League clash or catching up on Game of Thrones,” said Sky’s brand director for TV Products, Luke Bradley-Jones.

“The new home page is a really important innovation, putting Sky+ at the heart of the connected home.  And there’s even more to come, with a smart new approach to recommendations coming later this year.”

With the new update, Sky has also brought the search box “centre-stage” on the homepage, claiming that viewers already carry out an average of one million searches per day. Searching by title, actor, event, channel, sport or any key word will bring up both live and on-demand content results.

Sky said it is also refreshing it’s Sky+ app in line with the changes to the Sky+HD box. This includes the new homepage plus a new highlights carousel, along with a new feature that lets customers use the Sky+ app to turn their Sky+HD box on and off from their mobile or tablet.

The update rolls out today and will be available to all 8 million customers with compatible Sky+HD boxes by the end of May this year, Sky said.