Ukrainian broadcasters join to appeal to Russians for “responsible coverage” 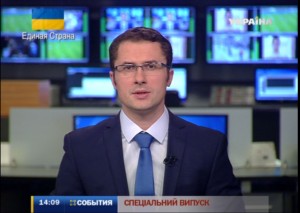 Ukrainian broadcasters have grouped together to write an open letter to their Russian counterparts asking for more responsible coverage of the current crisis in Ukraine so as not to worsen the conflict.

Separately, the main Ukrainian national TV channels have begun cooperating more closely by pooling their airtime and resources and by adopting a common logo featuring the country’s national flag.

The letter begins by referring to the “similar worldviews” and shared history of broadcasters in the two countries and the Ukrainian broadcasters’ belief that the Russians “also do not want war between two brotherly nations”.

“We ask you to understand and support the position of all central Ukrainian TV channels and to consider responsibly every word. We have no rights to stir up enmity between the fraternal Russian and Ukrainian people, to broadcast unverified information or distort the reality,” the letter continues.

“We are confident that if the existing confrontation escalates into military action – there will be no winners, everyone will lose. Our populations, bounded with history, faith and blood will both lose. We believe that today, together we can do everything to prevent this from happening. We believe there will be peace between our two countries.”

The three Russian broadcasters replied by referring the “one and indivisible greater Slavic television space” and the relevance of Ukraine’s alleged discrimination against the Russian language as a factor in the deteriorating situation. It also highlighted what it said were threats of “physical violence” against Russian journalists in Ukraine.

At the start of this week, major Ukrainian media groups including the signatories of the letter and 5th Channel adopted a common logo – the country’s national flag – and onscreen slogan – Yednyna Krayina/Yedinaya Strana (“United Country” in Ukrainian and Russian).

The group said the initiative was intended to display unity amongst the country’s mass media at a crucial moment in the country’s history and to prevent further tension.