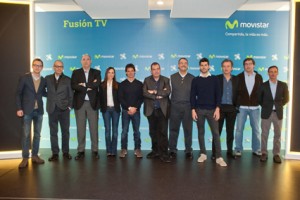 Shares in Prisa have surged on reports that Telefónica is close to signing a deal to take a controlling stake in the media group’s pay TV arm for €800 million.

According to unnamed sources familiar with the matter cited by Bloomberg, other bidders including Al Jazeera are competing with Telefónica to strike a deal with Prisa, and the media company has still to give final approval to the Telefónica cash offer.

Telefónica already holds a 22% stake in Prisa’s pay TV business, and the company’s chief operating officer, José Maria Alvarez-Pallete told journalists last week that the telco was interested in acquiring the business to expand its TV offerings in Spain.

Mediaset España also holds a 22% stake in the unit and has been seen by Prisa as another possible buyer, according to one of Bloomberg’s sources.

Para Todos is, as its name suggests, a generalist offering with a wide variety of channels. Energía is a general sports package, including cycling, motorsports and tennis, while Fútbol provides coverage of La Liga, Champions League, Europa League and Premier League football.

The new TV offering is available across television, smartphone, PC and tablet, and will offer a range of new features including personal recordings.

Fibre customers will be able to get a full quad-play package including 100mbps internet for €87, from which they will be able to upgrade to take one of the three themed packages. The full package – including all three thematic packages – will be available for €107.

Lower cost options starting at €45 with different channel packages will be available from April.

In addition to multiscreen, Movistar is providing 350 hours of recording storage, with automatic recording of the last seven days of programming for which subscribers have signed up to be added soon.