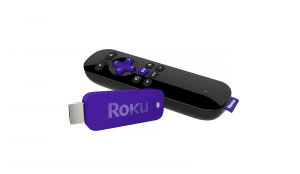 Over-the-top set-top-box maker Roku is taking on the likes of Google Chromecast with a new HDMI streaming stick that is due to launch next month.

Roku Streaming Stick will be available in the US, Canada, UK and Ireland – the markets where the firm currently sells its products – with customers able to pre-order now.

Like Roku’s previous generation of set-top boxes, the streaming stick will give viewers access to hundreds of channels of movies, TV episodes, music, news, sports, kids’ programming. Recently added channels in the UK include 4OD, YouTube and Condé Nast Entertainment.

Roku said the discreet dongle has a “streamlined look that’s ideal for wall-mounted TVs.” Users will be able to control the device using an included WiFi remote control or from a compatible app for iOS and Android smartphones and tablets.

The device, which will be available in shops in the UK and Ireland late next month, will be priced at £49.99 in Europe and US$49.99 in the US – slightly more expensive than Google’s comparable Chromcast stick.

Chromecast retails at US$35 in the States but is currently not available to buy in Europe, despite rumours that Google is planning to roll it out internationally.

The new Roku device follows the launch in 2012 of the Roku Ready streaming stick – a similar device, but one-that was only compatible with ‘Roku ready’ models of TV from selected manufacturers.

The new Roku Streaming Stick is designed to work with any HDMI TV set.

“The new Roku Streaming Stick gives consumers more choice for streaming entertainment to the TV than any other device. Consumers want a ton of entertainment, a friendly user interface, and options to control the experience with a remote or mobile device. This new Roku Streaming Stick brings all that and more – and in a tiny form factor,” said senior vice president of product management at Roku, Jim Funk.