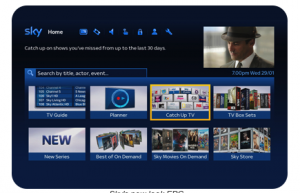 The BBC and Sky have ended a long-running dispute about retransmission fees, agreeing that the public service broadcaster will no longer have to pay to have its services carried on Sky.

The agreement will see the BBC’s existing charges to the satellite operator for platform services drop from £4.5 million (€5.5 million) per-year “to zero,” following government pressure about the controversial charge.

In a statement the BBC said both parties had “reached an agreement that secures the long-term availability of BBC channels and BBC iPlayer on the Sky platform.

“We will also continue to discuss opportunities that offer Sky customers new and innovative ways to discover and consume BBC content,” the corporation said.

Last summer the UK Department for Culture, Media and Sport released a report recommending the retransmission fees be stopped to bring the arrangement between Sky and the PSBs in line with “zero net charge” deals in place with cable operators such as Virgin Media.

At the time Sky received fees totalling nearly £10 million from all the PSBs channels – the BBC, ITV, Channel 4 and Channel 5. Though this sum has declined over recent years, cable operators by comparison received nothing.

Last May, the BBC raised the prospect of charging Sky to carry its channels as part of a long-running war of words between the two sides about retransmissions charges.