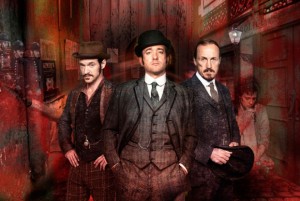 However, the BBC and Amazon will now co-fund a third season of the show and it will debut on the Amazon Prime Instant Video service in the UK (formerly known as Lovefilm).

US cable channel BBC America is coproducing and will show the series.

BBC1 in the UK will air it a few months after its streaming debut. BBC Worldwide will continue to handle international sales of the series, which will be filmed this year and produced by Endemol’s Tiger Aspect and Lookout Point.

Amazon made the announcement on the day its Lovefilm service was rebranded and took the same Prime Instant Video moniker as its equivalent in the US. It is also launching Alpha House in the UK, the John Goodman political satire that was one of its first wave of original shows. It launched in the US several weeks ago.

“We’re delighted to have secured not only the highly popular first two seasons of Ripper Street for our Prime Instant Video customers, but we can also confirm today that we will making season three, news that we know will delight the millions of fans of this brilliant British drama,” said Jason Ropell, head of Amazon Instant Video International content acquisition.

Amazon claims to have a larger selection of content than its rival streaming service Netflix. It said it has 15,000 movies and TV episodes.