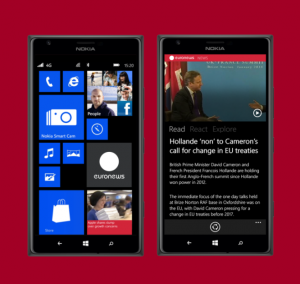 Over the coming months, both apps will offer more programmes and features including live streams, news quiz, bookmarks for favourite news stories and a search engine.

“This collaboration with major players in the market is a great opportunity for Euronews to expand on mobile platforms.” said Arnaud Verlhac, director, worldwide distribution at Euronews.

“The Windows Phone 8 app is already a huge success with 55,000 downloads in less than two months. These Euronews apps are part of the company’s strategy to be the first international news hub, by reinforcing our multiscreen leading position. This digital move is led by Walid Chamak, head of digital partnerships at Euronews, and it is showing considerable success.”