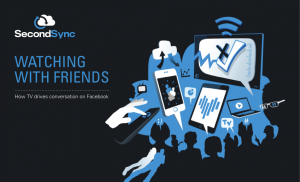 Up to 25% of TV audiences post content related to the show they are watching on Facebook, with the majority of these comments made in real-time, according to a new white paper from social analytics firm SecondSync.

The ‘Watching With Friends’ report, the product of SecondSync’s recent social TV partnership with Facebook, claims that 60% of daily Facebook interactions about a TV show occur during the airing – challenging a previous assumptions that most TV-related Facebook conversations do not happen in real-time, unlike on Twitter.

“Viewers use posts to start conversations that cluster around events in the show. In turn, posts often seed huge volumes of comments and likes that have broader peaks of engagement, which are sustained for a much longer time period as friends continue discussions long after the show has aired,” according to SecondSync, which analysed discussion on the platform in the UK, US and Australia for the report.

In keeping with the concept of “second screening” the study said that 80% of TV-related chatter on Facebook comes from a mobile device.

It also identified “distinct patterns of engagement” around different types of show – for instance engagement around dramas peaked at the end of the broadcast, posts around competition shows mapped directly to performances and documentaries often generate high volumes of conversation in comments.

“This is the first in-depth analysis of Facebook’s social TV data across multiple territories, and the first time Facebook has released social TV analytics to the industry at this scale,” said SecondSync.

“The huge volumes of public conversations on Twitter have meant that until now social TV has largely been synonymous with one social network. SecondSync’s findings offer an additional perspective.”

SecondSync analyses social media conversations around TV shows, offering insights to clients in broadcast and advertising. The white paper is the first research to come from SecondSync’s January partnership with Facebook. This agreement will see SecondSync work with the social network to analyse TV-related chatter in multiple territories, using aggregated and anonymised data to protect user privacy.