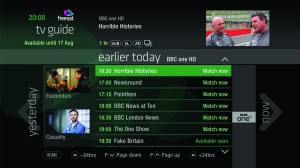 Freesat itself added 31,000 new households in the quarter to December and the platform now reaches over 1.8 million homes.

The recently launched low-cost Freetime HD catch-up box accounted for one out of every three Freetime set-top sales during the quarter.

January saw the successful launch of Freesat’s new mobile app, which it said has been downloaded 130,000 times in the first two weeks. The app provides a TV guide and remote control and allows viewers to set recordings remotely.

“Freesat’s strong results in Q4 demonstrate the continued appeal of high quality TV without expensive contracts. With a Freetime box viewers are able to access over 200 TV and radio channels for free as well as being able to roll back the TV guide to access programmes from the past seven days, ensuring that they don’t miss any of their favourite shows,” said Emma Scott, managing director of Freesat.

“This quarter we are particularly proud of the success of the Freetime catch-up box which has been extremely popular with new users and allows even more viewers to benefit from Freesat’s market-leading Freetime technology. We’re pleased to say that our strong momentum has continued into the New Year with continued growth in household penetration and the successful launch of the Freesat mobile app.”