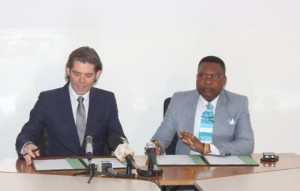 Euronews has unveiled plans to launch what it claims will be the first pan-African rolling news channel, Africanews.

The bi-lingual network is slated to go live in summer 2015 in partnership with the national television channel of the Republic of the Congo, Télé Congo.

The channel will launch in French and English, with other languages that are widely spoken on the continent, including Portuguese, Arabic and Swahili, to follow.

It will be headquarted in the Republic of Congo’s capital city Brazzaville, with regional offices to be set up across Africa.

The news comes after Euronews CEO Michael Peters and Télé Congo managing director Jean Obambi signed a co-operation agreement for the launch of the channel over the weekend.

“Twenty 20 years after the launch of Euronews, we are breaking new ground in the world of news,” said Peters at the signing of the deal.

“Our strategic and highly ambitious project will not be a mere African ‘window’ made by Euronews, as most international news channels do, but rather a full-fledged pan-African network, with editorial choices made by Africans for an African audience.”