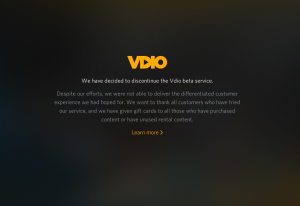 Vdio, the video rental service for movies and TV shows from Skype co-founder Janus Friis, has shut down after less than a year.

The video site said in a statement that it had discontinued the service as it was “not able to deliver the differentiated customer experience we had hoped for.”

Vdio added that it was unable to deliver a “business model which was attractive to shareholders.”

The site shut down on December 27, with site users unable to access their account information from that date. Vdio said that customers who had purchased videos or had unused rentals will be offered Amazon gift cards in an amount equal to the total cost of their transactions on the site.

Vdio launched in the UK and US in April and moved into Canada in August.

The service was developed by the same team behind the 2010-launched music subscription service Rdio, and was designed to let users buy, rent and share content with friends on a pay-per view basis.

News of the shut-down comes less than a month after Amazon’s global head of digital video Anthony Bay moved to Rdio to take up the CEO role.

He took over from Drew Larner was previously CEO of both Rdio and Vdio, prior to which he worked at firms including Twentieth Century Fox.