Blockbuster to shut US DVD business, focus on digital 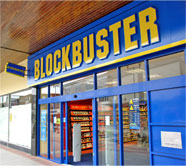 Dish Network-owned video rental firm Blockbuster is set to close all its remaining US stores and cease its DVD-by-mail services by early January 2014 to focus its efforts on digital offerings.

Announcing the move, Dish said it would close its approximately 300 remaining US retail stores and its distribution centres – all the physical distribution elements of its business – as a response to the rising popularity of digital video.

“This is not an easy decision, yet consumer demand is clearly moving to digital distribution of video entertainment,” said Joseph P. Clayton, Dish president and chief executive officer.

“We continue to see value in the Blockbuster brand, and we expect to leverage that brand as we continue to expand our digital offerings.”

The Blockbuster By Mail service is due to shut down in mid-December, the company said with the physical stores to follow by early next year.

Satellite TV operator Dish said that it would retain the licensing rights to the Blockbuster brand, and key assets, including the company’s significant video library.

“Dish will focus on delivering the Blockbuster @Home service to Dish customers, and on its transactional streaming service for the general market, Blockbuster On Demand,” the company said.

In the past 18 months Blockbuster has already shed some US assets, as well as its operations in the United Kingdom and Scandinavia.

Last month Gordon Brothers Europe, which purchased Blockbuster’s UK business for an undisclosed sum in March, said it planned to put the business into administration after failing to reverse its ailing performance.