BBC iPlayer requests up by a fifth in August 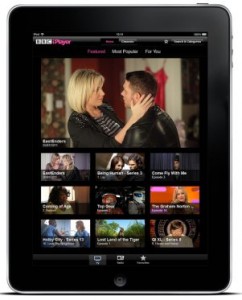 Viewers made 234 million programme requests through the BBC’s iPlayer catch-up service in August, up 19% year-on-year, according to the BBC’s latest stats.

The monthly performance pack said that mobile and tablet requests made up 32% of total iPlayer requests – equal to the record mobile views set in June this year.

Month-on-month the proportion of tablet requests climbed from 16% to 18% while mobile requests dipped slightly from 15% to 14% – partly due to a measurement fix that saw the BBC recategorise some Android devices, including the Kindle Fire and Nexus 7, which had previously been put in the mobile, instead of the tablet, category.

In August, the iPlayer received an average seven million daily programme requests for radio and TV content, up from 4.2 million for the same period last year. Weekly requests came in at around 49 million.

Popular programmes on the service for the month included Top Gear, The Great British Bake Off and new BBC1 comedy Big School, which generated 1.1 million requests. Bad Education – the first of BBC Three’s scripted comedies to premiere on iPlayer – generating over a 1.5m requests before it aired on BBC Three.

“The profile of BBC iPlayer users has evened out over time in terms of male/female ratio, but remains strongly under-55 in terms of age, which is younger than the typical TV viewer or radio listener’s profile – although more in line with home broadband users,” said the BBC.