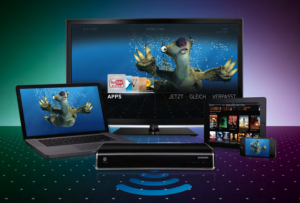 Horizon has launched in Germany

Liberty Global is working to address consumer complaints about the existing platform by mailing out 270,000 new-designed remote controls to accompany the current H2 software upgrade of its flagship platform, according to Peter Dorr, managing director, strategic marketing, sales and customer care, Liberty Global, addressing the CTAM Europe EuroSummit this morning.

Liberty Global will also launch a new Horizon box aimed at second TVs that connects to the main Horizon device wirelessly. The companion box streams TV, DVR, VoD and home content to other rooms in subscribers’ houses. “This will launch soon,” said Dorr.

Dorr admitted that Horizon had faced some problems over the period it has been available in its different markets.

“Consumers think navigation is too slow,” he said. “They said there are too many clicks to navigate.” He said consumers were also frustrated by the lack of buttons on the Horizon remote control. They also found the UI too dominant and found that it was difficutl to move back to previous channels. They also found that keyword entry for the search function was unfriendly and that the overview of categories and options is unclear.

Dorr said Liberty Global had responded by releasing H2, the new version of Horizon, a couple of weeks ago. He said that this had improved speed by up to 70%. Shortcut keys had been added to the remote and new shorcuts had been built in. A ‘back to live TV ‘ button, along with direct access to features such as ‘recordings’ had been added and the size of the main menu had been released.

The cable operator will send out 270,000 new remote controls with new functions and a QWERTY keyboard on the reverse. “We are sending this out to customers now,” said Dorr. “This is another example of what the flexibility of the box allows us to do,” he said.

He said that Liberty is also sending customers a letter explaining the changes, backed up with video messages.

Outlining Liberty’s future vision for the platform, Dorr said that the development of Horizon could see the brand extend to a range of platforms that will enable connectivity. Horizon could be linked to unlimited wireless connectivity, using ‘Horizon WiFi’  spots on the model already developed by Dutch operator Ziggo.

“Why not join together and create a wireless network for the whole of the Netherlands?” said Dorr. He said the cable industry could also join together to create a universal cable WiFi network across Europe with a single login, enabling free WiFi across international boundaries for cable subscribers.

Fixed mobile convergence, enalbing landline calls to be redirected to mobiles at landline rates, could be marketed as ‘Horizon Phone’, said Dorr. “You could enable a global network of WiFi enabled calling at very low prices,” he said.

The seamless delivery of services will be enabled by ‘Horizon Internet’. “We believe customers should have a minimum of 120Mbps – this will be the minimum future standard for the cable network,” he said. “I don’t think speed will be a limiting factor for our industry”

Dorr said Liberty could also launch multi-SIM options with each bundle for individuals and families under a ‘Horizon Mobile’ brand.

Horizon has now launched in three new markets, following its debut in the Netherlands. The company has learned from its experiences to adjust its marketing, said Dorr.

Dorr said that the Swiss marketing campaign had been more focused, bringing the benefits down to feature level. “We really went more into product specifics than we did in the Netherlands,” he said. “We also almost sold it as a standalone product and then finally mentioned it came as part of a bundle.”

Liberty Global then changed its marketing in Ireland to focus on bundling. “Ireland is slightly different. We have to fight this fierce competitor called Sky,” he said. Liberty had emphasised the fact that Horizon came as part of a bundle of products in Ireland.

In Germany, Liberty Global found that customers fwere frustrated by the lack of choice on offer from established programmers. “We addressed the need of consuemr to watch what they want, when they want and where they want,” said Dorr. “It’s going very well but it’s too soon to claim success.”

In Germany, Liberty Global had begun with a pre-launch campaign to highlight how frustrating the current TV experience was, before the campaign proper showed what Horizon could deliver, said Dorr.

Dorr said that Liberty Global had focused on a couple of features in its marketing messaging around Horizon. First, it is a “great TV experience, with a 3D graphical user interface”, said Dorr. The box also integrates WiFi, enabling wireless distribution around the home.

Dorr said consumers are still struggling to undeerstand the recommendations features based on personal viewing profiles.

Dorr said that the ability to wirelessly stream phontos, movies and music to the TV was a big feature for users.

“Search is difficult to grasp initially but once you do it’s great,” said Dorr.