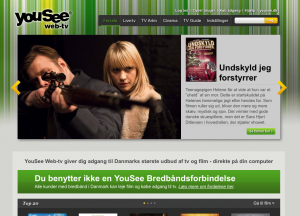 Danish cable operator YouSee has expanded its OTT TV service with the addition of 14 new channels, including top sports channels from TV3, giving broadband customers access to about 42 services online both inside and outside the home.

Sports services TV3+ and TV3 Sport 2 are amongst the channels to be added to the platform from today, giving viewers access to English Premier League and European Champions League football.

The web TV services is free to YouSee’s 440,000 broadband customers, with the number of channels available to users determined by the packages they take from the regular cable TV service.

YouSee has not concluded out-of-home rights will all channel partners – those that have yet to strike agreements include TV2 and SBS Discovery – so the range of services available within the home is higher than the range available on the move. About 54 channels are available on web TV in total, of which 42 are now available while users are on the move.

The Bland Selv offering allows internet users to choose the combination of downstream and upstream speeds to match their needs. Users can also vary the combination at certain times, for example with more downstream speed in the evening when people are watching online video, and symmetric speeds during the night when they can back up home media to online storage.