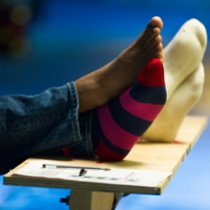 UK free-to-air digital-terrestrial TV platform YouView is launching a new advertising campaign this autumn that will focus on conveying the benefits of catch-up TV, on-demand and DVR.

The new advert, due to run across all media including TV, print press, radio, digital and social media from Saturday 7 September, will feature pairs of feet in front of a TV screen and YouView set-top box.

The campaign will demonstrate how easy it is for viewers to relax and catch up on their favourite TV programmes with YouView, using the line ‘Catch up with your feet up’.

This advertising campaign, which has a media spend in excess of £10 million (€11.7 million), was created by Albion, who replaced the incumbent agency Adam & Eve in April.