TV and video watched by 72% of people on mobiles 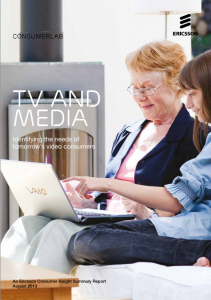 Some 72% of people watch TV and video on mobile devices each week, according to respondents of Ericsson’s latest ConsumerLab report.

The report said that 42% watch mobile TV and video content outside the home, while 75% multi-task by using mobile devices at the same time as watching TV.

Ericsson also noted a trend for ‘place-shifted viewing’, where people watch one piece of content across several locations and times.

Though growth in on-demand is starting to “taper off,” 82% of people use YouTube or similar services at least monthly, according to the study.

On-demand viewing among older viewers is also seeing “dramatic” growth. Among people aged 55-59 there was an 18% increase in more-than-weekly on-demand viewing since 2011, while 41% of respondents aged 65-69 said they now watch streamed on-demand or time-shifted video more than once a week.

“When the TV industry began talking about mobile TV, everyone assumed it was going to consist mainly of professionally-made shorter video clips. Now, we see a really interesting twist on that story. People are indeed watching shorter video sessions, but they create the video clips themselves by pausing and resuming full-length TV shows and movies whenever it suits them,” said Anders Erlandsson, senior researcher at Ericsson ConsumerLab.