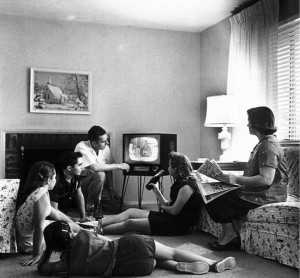 More than half of UK adults now media multi-task while watching TV, though an increasing number still view TV on their main living room screen, in what Ofcom hailed as “the reinvention of the 1950s living room.”

In its 2013 Communications Market Report, published today, the UK broadcast regulator said that people are still coming together to watch TV in the living room – with 91% of UK adults watching their main TV set each week, up from 88% in 2002.

However, Ofcom noted the “increasing array of digital media” vying for peoples’ attention, with 53% of UK adults multi-tasking on different devices while watching TV on a weekly basis. This figure was even higher among young people at 74%.

This activity was driven by an increase in smartphone and tablet ownership, with Ofcom noting that 51% of UK adults now have a smartphone, and 27% a tablet – almost double the proportion compared to two years ago.

However, Ofcom noted that participating directly with programmes was less common, with just 6% entering competitions or voting about what is on TV, and 3% using a programme app.

“Newer social television apps such as Zeebox or GetGlue, which enable viewers to chat about the programme as they watch, have yet to make an impact, with only 1% of viewers claiming to have used these while watching television,” Ofcom added.

The report claimed that ‘media stacking’ – or using smartphones and tablets for completely unrelated activities while watching TV – was another “major social phenomenon” with 49% of people doing this each week. Such activity included surfing the net (36%), social networking (22%) or online shopping (16%).

Though Ofcom said that the average household now owns “at least three” internet-enabled devices, it claimed that people were increasingly reverting to having a single TV in their household at 41%, compared to 35% in 2002.

Live TV viewing is also on the rise. In 2012, TV accounted for 90% of all viewing, with the average person watching just more than four hours a day  – 15 minutes more than in 2008.

The remaining 10% of viewing was time-shifted, but Ofcom said that the BBC iPlayer, the most-used TV catch-up service in the UK, accounts for just 2% of BBC programming consumed.

“Many people are using video-on-demand services, but the majority are viewing less often and for shorter periods than watching linear TV,” said the study.

“Our research shows that increasingly families are gathering in the living room to watch TV just as they were in the 1950s – but now delivered on bigger, wider and more sophisticated sets. Unlike the 1950s family, however, they are also doing their own thing. They are tweeting about a TV show, surfing the net or watching different content altogether on a tablet,” said James Thickett, Ofcom’s director of research.