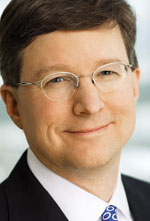 Polish and other central and eastern European customers are increasingly looking to non-linear and advanced TV services, but bundled pay TV remains key to the success of content providers and guarantees continued investment in high value content, according to Mark Hollinger, president and CEO of Discovery Networks International.

Speaking at the Digital TV CEE conference yesterday, Hollinger said that VOD is beneficial provided it is additive rather than a replacement for linear TV.

Discovery conducted research amongst 5,000 viewers across 10 CEEMEA markets in partnership with the The Future Foundation.

Hollinger said Discovery had rarely done deals with SVOD players, although it had done a deal with Netflix. However, in this case Discovery had insisted on network branding as part of its deal. “We didn’t want to sell programmes in a completely unbranded environemnt but we also didn’t realise how important it was for viewers,”he  said.

He said that Discovery was, on the other hand, keen on doing TV Everywhere deals with affiliates and now had deals with about a quarter of its distribution partners.

Referring to investment in channels in the CEE region, Hollinger said that Discovery intends to make ID into another global network to join Discovery Channel and TLC.

The female-oriented ID was launched in Poland last year. He said the channel was really starting to take off and that Discovery had used local talent as on-air hosts for shows including Behind the Mansion Walls. “We’ve seen the use of local talent has created great resonance with viewers in Poland,” he said.

Hollinger said Discovery has invested in six local programmes since it launched TLC in the market. It had also filmed episodes of The Magic of Science and Ultimate Cops in Poland for distribution elsewhere.

Hollinger said Discovery had been encouraged to invest in Poland by the government’s open attitude to allowing international broadcasters to compete on a level playing field with competitors. He said this wasn’t the case across the region.

Localisation has been key to Discovery’s strategy, said Hollinger. Most of DNI’s staff are based in-region and are mostly local to those regions. “Having local expertise on the ground is important,” he said.