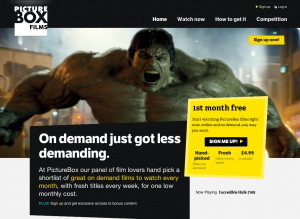 NBCUniversal has launched a subscription video-on-demand service direct to consumers in the UK.

NBCUniversal is offering its movies subscription services PictureBox Films direct to consumers in the UK and Ireland for the first time for £4.99 (€5.86) a month.

The move follows a redesign and rebranding of the service. Users will be able to access 60 hand-picked films, at any time, through their desktop computer, Samsung Smart TV or mobile devices such as iPads, iPhones and Android phones.

Movies on the site, which launches today, include The Eagle, The American, Bridget Jones’ Diary, 2 Fast 2 Furious, Jarhead and The Bourne Identity.

PictureBox originally launched in 2006 as a digital TV SVOD service and is available via Virgin Media, TalkTalk, BT Vision and Top Up TV. The service is also available in Poland, Russia, Latin America, Brazil and Singapore via local platform providers.