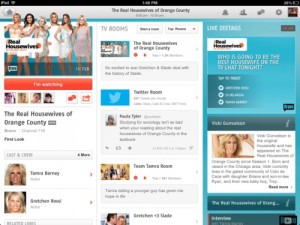 Second screen TV app Zeebox has launched a new feature called ‘TV Rooms’ that will let TV fans communicate to each other in virtual chatrooms, based around specific shows, characters and themes.

Zeebox described TV Rooms, which launches in beta, as a new approach to second screen viewing that will “impact the way fans interact, engage, individualise and experience TV.” It will also allow brands and advertisers to engage with fans in a new way, the firm said.

With the launch, Bravo Media has come onboard as the first network to set up an officially sponsored Zeebox TV Room for the show The Real Housewives of Orange County. This launches in tandem with the programme’s 100th episode.

“The number one request from consumers has been to further personalise their Zeebox experience. The launch of TV Rooms gives anyone the ability to join and build a range of different communities centred around one or a set of TV shows – a place where they can call the shots, share ideas, conversations and organise affinity groups based on what’s important to them,” said Jason Forbes, executive vice president USA of Zeebox.

At launch, the app features more than 4,000 TV Rooms across a two-week viewing schedule, as well as 60 themed TV Rooms ranging from “Reality TV Time” to “Late Night Show Breakdown.” The Top 50 Rooms will be highlighted every week and ranked based on activity and members currently joining.

The update is available in the iOS version of the app, with an Android release due in the coming weeks. Zeebox was founded in 2011, is headquartered in London and has offices in New York and Sydney.