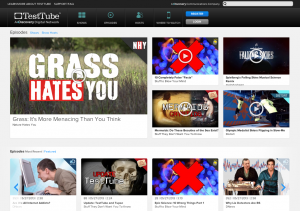 TestTube launched at the end of last week, debuting with a slate of 15 short-form series with “many more in development,” Discovery said.

The videos, which are available on TestTube.com, through Revision3’s mobile site and apps and on YouTube, Xbox, include all-new series fronted by internet stars and original online programs that leverage other Discovery web properties.

Among the new series is DNews, a “slo-mo” show called Distort, while Tory Belleci, the co-host of the Discovery Channel show MythBusters, will appear in Blow it Up, a short-form series to launch late summer.

“Discovery is in the business of igniting curiosity – from on-air to on-line – and for all types of audiences. This is another step in our mission to be the number one nonfiction video and media company on all screens,” said JB Perrette, chief digital officer, Discovery Communications. “We’ve doubled our original online video output this year, and are growing new audiences with TestTube and other digital networks that are creating great content that entertains and engages.”