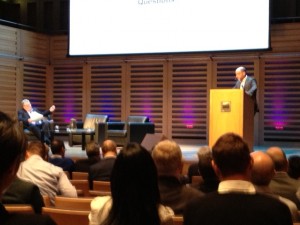 BT’s recently launched raft of linear HD pay TV channels has a small but growing customer base and will be fully integrated with its YouView offering by the summer, according to Alex Green, director of TV, BT Vision.

Green, speaking at the DTG Summit in London yesterday, said that the extra channels, which are available only to fibre customers, had been taken up by a base of about 10,000 customers, “but growing quickly”.

Green said that these channels were now being run over YouView in some trial homes and would be fully integrated in time for sports events over the summer.

Green said BT’s fibre network now covered over half the country and would soon reach two thirds of the country.

He said the imminent addition of its own sport channels will enable it to target high-spending pay TV customers for the first time. “Football has phenomenal power, and within football it’s the Premier League, and that’s what’s led to BT’s investment in the Premier League,” he said.

Green said BT had built on its Premier League rights by adding FA Cup, Europa League and other international football rights as well as Rugby Union rights and WTA tennis.

Green said a lot of Sky customers took broadband from BT, giving the telco a way to target those homes with an attractive bundle of content and broadband access.