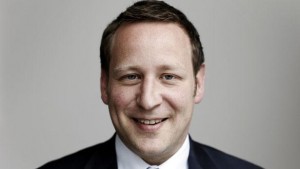 The 700MHz frequency range currently given over to digital-terrestrial broadcasting is clearly going to be re-allocated because of demand for mobile broadband spectrum, and the UK government – along with the Future of Innovation in Television Technology (FITT) task force – is looking at three possible scenarios for the future of the DTT platform, according to Ed Vaizey, minister for culture, communications and creative industries.

Vaizey, speaking at the DTG Summit event in London this morning, said that changes in 700MHz spectrum use would clearly be implemented following the World Radiocommunication Conference (WRC) in 2015. However, he said, there is likely to be a delay after that time before action is taken in the UK to clear the spectrum for mobile broadband. “It’s very unlikely we will clear 700MHz before 2017,” he said.

Vaizey said the government was considering three scenarios related to the future of the UK DTT platform after the spectrum changes came into force.

One scenario, he said, is a more limited DTT offering. A second is DTT sitting alongside cable and satellite, with hybrid enhancements delivered through super-fast broadband. The third scenario is the clearing of 700MHz spectrum, with a migration of DTT to 600MHz, and minimun changes being made to the platform.

“All this highlights why the FITT taskforce is so important,” said Vaizey. “We want to see models that allow our TV industry to continue to support public broadcasting and the creation of high quality content.”

Vaizey said the government wanted free TV services to be a central part “of the competitive mix”, as well as to enable the deployment of new mobile services.

“If we get it wrong we will severely damage a valuable ecosystem,” said Vaizey.

However, he said the TV industry had to come up with solutions to make the transition to new technology as seamless as possible.

Vaizey said that spectrum pricing would come into force and would have an impact on the broadcast industry. He added that “spectrum should carry a price” without exceptions.  Ofcom’s recently launched consultation on the use of 700MHz spectrum should take account of how it is used, but that should not ignore the fact that spectrum came with a cost, he said.

“We are not going to penalise spectrum users who have regulatory requirements to use it in a certain way,” he said.

Vaizey said free-to-air TV and Freeview would remain “a priority”. He said the fact that the government had “put a lot of money on the table” to prevent interference from the rollout of 4G networks showed how seriously it took TV reception.

“I took the view that we should throw whatever  was necessary to ensure that interference was kept to a minumum,” said Vaizey, referring to the 4G issue.