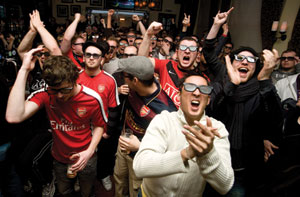 The number of 3D TV homes will rocket from 13.5 million at the end of last year to over 100 million by 2017, according to DTVE publisher Informa Telecoms & Media.

However, the 3D TV sector faces several challenges including a lack of content, scarcity of channels, high production costs and the fact that many viewers do not like wearing glasses.

There is currently a fierce debate in the industry as to whether 3D TV has a viable future, but Informa says that the sector will grow strongly because of the backing of key industry players including set manufacturers, platform owners and the Hollywood studios.

“The market will still be immature by 2017, so some growth opportunities exist beyond this date,” the media intelligence company noted. “Informa believes that 3DTV set penetration will take off, as TV set manufacturers embed the technology into a high proportion of their sets. But take up of 3D content services will be limited, at least until the technology has progressed significantly so that a natural viewing experience, without glasses, is achieved.”

By region, Asia Pacific will have the most 3D TV homes by 2017 with 49.6 million. North America will have 33.2 million homes and Western Europe 18.3 million.

By country the US will continue to be the dominant active 3DTV territory, recording 31.9 million active 3DTV households by end-2017. China will be close behind with 30 million, followed by Japan with 7.6 million and Germany 4.4 million.