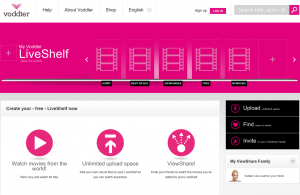 Scandinavian VOD site Voddler is going global with a revamped service and new focus on legal content sharing with friends.

The new-look Voddler revolves around two new services – LiveShelf and ViewShare. These allow viewers to assemble a cloud-based ‘shelf’ of content that they can access from any device and share with up to 10
friends.

In an extension of its core VOD service roots, Voddler will charge a €5 per-month for users to be able to watch shared content from their friends. It will also support cloud access for uploaded, ripped DVDs and content downloaded legally from other sites, as it searches for new revenues in an increasingly crowded VOD space.

The majority of the VOD content that it supplied previously will still be available to buy and the firm is in talks with all the major content operators to offer more titles – which can be purchased on top of the ViewShare fee.

Currently Voddler has deals with three of the six Hollywood majors – Disney, Warner and Universal – and is in talks with up to 50 more content providers, it claimed, ranging from indies, broadcasters and studios.

Speaking at a launch event in London, Voddler CEO Marcus Bäcklund said that the new Voddler is currently available in its existing five markets – the four Scandinavian countries and Sweden – and will roll out to the rest of Europe, including Russia, this week. It will launch in North and South America, Asia and Oceania in the coming weeks.

The revamp follows Netflix’s Nordic launch last year and the rollout of HBO Go in the region. However, Bäcklund said this was not the reason for the new service launch.

“We took this decision before it [the market] was so crowded. We were almost alone, we had a big market share, we had all these deals with studios, but still it was almost impossible to make a profit. So obviously at that point we thought about how could we build this service layer on top of our technology?” Bäcklund told DTVE.

Voddler’s LiveShelf service is powered by its VoddlerNet proprietary P2P-based streaming solution. The Voddler store currently has some 2,000 titles, but Bäcklund said it aims to ultimately fill its LiveShelf cloud with “every movie” on the web, using ViewShare as a legal alternative to peer-to-peer filesharing.

“Look at the size of a Pirate Bay cloud, it’s massive. I don’t want to be less. I want to fill this cloud,” he said. He added that the studios, which take a cut of the ViewShare fee have also been behind the scheme, as it effectively re-monetises purchased content.

Voddler was initially founded in 2006 and has taken €24 million in funding to date from investors including Cipio Partners and Nokia Growth Partners.