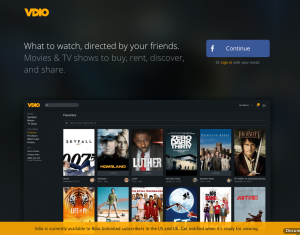 Vdio, a new video rental service for movies and TV shows from Skype co-founder Janus Friis, has launched in the UK and US.

The service, which was developed by the same team behind the 2010-launched music subscription service Rdio, is now available to Rdio Unlimited subscribers ahead of a wider rollout.

Vdio is designed to let users buy, rent and share content with friends on a pay-per view basis, with Rdio subscribers to receive US$25 (€19.50) of credit to try out the service.

Though the pay model differs from Rdio’s unlimited access approach, the firm claims that this allows it to offer new release titles – including Skyfall, Life of Pi, Zero Dark Thirty, Lincoln and The Hobbit.

“TV shows are available the day after they air and you can subscribe to seasons at a discount. We plan on adding new titles and bonus content daily, so be sure to check back regularly to see what’s new,” the firm said in a post on the official Rdio blog.

The Vdio design centres around playlists for TV shows and movies, called ‘sets’, which are designed to make it easier for users to share lists of their favourites and discover new content. At launch the service is available to access through iPad or PC.

“When we launched [Rdio] in 2010, our ambition was to design the best experience for the watch-and-listen-anywhere, share-everything, stream-it-now era of content distribution,” the firm said. “Today, we’re previewing our next step on that journey.”

The launch follows reports that music streaming rival Spotify is also mulling a push into the video space – even though the firm has stressed that its current focus is on its music offering.

Rdio is headquartered in San Francisco and was founded by Janus Friis, one of the creators of Skype. Drew Larner is CEO of both Rdio and Vdio and previously worked at firms including Twentieth Century Fox.