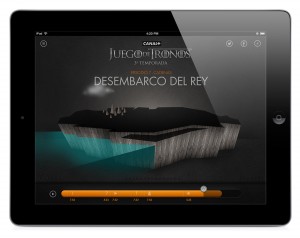 Pay TV operator Canal Plus Spain has tamed up with Israel-based technology provider Applicaster to launch a second screen app for Game of Thrones.

The app, Vive Poniente, which was developed by Applicaster, offers synchronised play-along features for the third season of the show, known locally as Juego de Tronos, launched at specific times within each episode. Viewers can earn points and achievement center badges, enabling them to retrieve exclusive content, or win sponsored prizes.

Users can explore who else of their Facebook friends has the app and who can be invited to watch, tweet via an integrated live feed and check-in to the show.

As each episode progresses the background images in the app change to reflect the map of Game of Thrones’ seven kingdoms and other locations, depicting places in the show such as the Wall, the Riverlands, and the Iron Islands.

“Our main goal was to offer an extended TV experience that accompanies the viewer whenever they choose to watch an episode, whether it is during broadcast time, or after. Viewers decide,” Said Berni Melero, web and multimedia director, Canal Plus/Prisa TV.