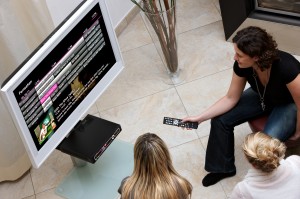 The IPTV service, which launched in 2006, now has 2 million customers, the company said, up from 1.6 million in 2011.  Across the rest of Europe, Deutsche Telekom said its IPTV operations “continued apace in almost all markets” with customer numbers climbing year-on-year from 809,000 to 954,000 – an overall growth of 18%.
Elsewhere, the firm outlined a significant investment plan, with Deutsche Telekom CEO René Obermann saying “We are going on the offensive – with extensive investments in networks and in the market.”

For full year 2012, the company said it had achieved its financial targets. Net revenue remained steady at €58.2 billion. Adjusted net profit totalled €2.5 billion, 11.3% less than in the prior year.

As of year-end, Deutsche Telekom’s reported net loss stood at €5.3 billion, down €0.8 billion from the end of the third quarter of 2012. The firm said this was almost entirely due to a €7.4 billion impairment loss in the US.  ”This loss of billions is not what it appears to be: We are not lacking in funds to drive forward the development of the Group. As we said in December, we want to massively step up investments in the future again, to almost €30 billion for 2013 to 2015,” said Obermann.