Across the Middle East and North Africa, pay TV subscriber numbers passed the 10 million mark during the first quarter of 2012.

In the Middle East, the introduction of advanced peoplemeters in the UAE and Saudi Arabia point the way to an increasingly transparent and open market. The establishment of several ‘media hubs’ over the last decade now offer foreign businesses a location from which to gain a foothold in the region. An advanced infrastructure in some areas of the Middle East, coupled with a ‘tech savvy’ youthful demographic, allows for pockets of prosperous growth in the IPTV and OTT sectors.

Market dynamics
New research from Informa Telecoms & Media has found that there were 92.1 million TV households in the Middle East and North Africa (MENA) region at end-2011 rising to an estimated 94.5 million by end-2012.

Satellite TV dominates, being the primary TV service in 67% of MENA TV households. Some homes, particularly in Gulf States, either have two dishes or a dual LNB (amplifier) to take signals from two satellites.

With satellite dominant, there has been only limited cable and IPTV activity, although IPTV, in particular, is growing fairly quickly, albeit from a very low base. Despite some signs of progress, broadband penetration in the region remains low, with 16-17% of households in the Middle East having a broadband connection. IPTV is therefore restricted from greater progress, both by this lack of broadband and also by the fact that where broadband is in place it is not always suitably robust to facilitate IPTV provision.

Informa’s research shows that region-wide there were 9.9 million MENA pay TV households at end-2011, giving a pay TV penetration rate of 15% of TV households. The 10 million pay TV subscribers mark was passed in the first quarter of 2012 and was expected to push on to 11 million by end-2012.

This analysis includes Turkey and Israel, which together account for 6.4 million of the 2011 pay TV total (a 65% combined share). When these are excluded, the other MENA countries share 3.5 million pay TV subscribers between them. Informa forecasts that the region will have 15.8 million pay TV subscribers by end-2017, representing 20% penetration of TV households. The ‘core’ MENA countries will account for 38% of the total, equivalent to six million subscribers.

Outside of Turkey and Israel, OSN is the largest full service supplier with over 700,000 subscribers – although the Al Jazeera Sports bouquet has more than 1.3 million subscribers. Other significant players include ART, although its subscriber base has been in significant decline, plus Etisalat’s operations in the UAE. Canal Plus Overseas had added a North African dimension to its sub-Saharan pay TV service, but it failed to find an audience and has been closed.
TV advertising runs at US$5-10 (e4-7.50) per capita in the MENA region compared with US$100 in western Europe.

Although the Middle East is unlikely to reach European levels in the foreseeable future, there is plenty of growth potential. However, TV advertising is not growing as fast as the number of channels available, especially free-to-air ones. There were more than 600 free-to-air (FTA) satellite channels by mid-2012, up from just 100 in January 2004, although the rate of growth appears to be slowing. The major players feel obliged to launch thematic FTA channels as their core services come under threat from audience fragmentation. With so many FTA channels on offer, the incentive to subscribe to a pay platform diminishes.

Monetising subscription-led content has proved difficult for pay TV providers, largely due to the wide availability of satellite-delivered free-to-air channels, exacerbated by the problem of generating steady revenue in a region with an abundance of piracy across most platforms. However, the industry overall is seeing a period of exceptional growth. The UAE and Saudi Arabia have introduced their first peoplemeters to gauge television audiences across the country, with a staged rollout beginning in July 2012. Dubbed ‘tview’, the new measurement system will include additional demographic information such as nationality, gender, location, age and socio-economic status for viewers aged four and above. The growing use of more efficient ratings systems will be particularly welcomed by content producers who, until now, have had limited confidence in the indicators they receive to measure the performance of their programming. 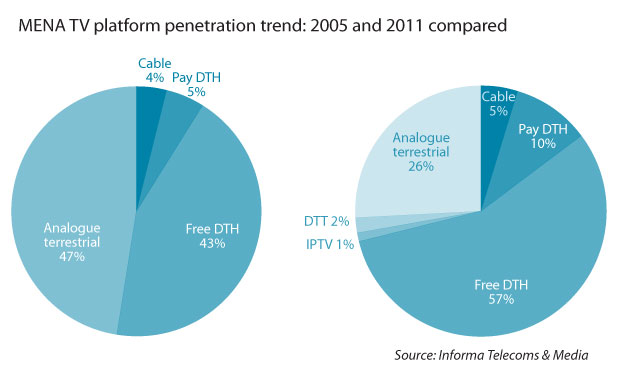 Content business
Early moves by international players into the region have often involved partnerships. These have included Fox International Channels’ partnerships with Saudi-based Rotana, launching channels including Fox Movies, Fox and FX, and a separate joint venture with Abu Dhabi Media for a local free-to-air version of the National Geographic Channel. Other joint ventures include Sky News Arabia, an Arabic news channel created by the UK’s BSkyB and Abu Dhabi Media Investment Corporation.

The growing success of international formats like Deal or No Deal and Greed in MENA points to the fact that, overall, the regional independent production industry is largely underdeveloped and fragmented. Local content across traditional and digital platforms in the MENA region remains in high demand but low supply – again largely due to the lack of effective production/monetisation models. An US$800 million development in the heart of the Arabic world has sought to change this however.

As Dubai establishes itself as a global marketplace, inviting an influx of Western business, this, in turn, is bringing about a change in the traditional TV market, both in terms of pay TV platforms and the production houses that supply them. Five media cities have been established in the UAE since 2001, presenting new opportunities for foreign companies. The opening of Dubai Media City (DMC) – a tax-free business ‘citadel’ – in 2001, for example, has provided a regional base for the likes of Reuters, CNN, BBC Worldwide, National Geographic and Bloomberg, as well as print players ranging from The FT to Rolling Stone. To-date, over 1,400 companies from over 75 countries reside there, covering the entire value chain; from consumer research to post production services. DMC was also instrumental in the development of DVB-H mobile TV in the UAE.

Neighbouring Abu Dhabi, the UAE’s capital, has also established a media zone. The TwoFour54 initiative was set up in 2008 with a remit to develop Arabic content for Arabic-speaking audiences and to encourage the development of local Arab media. TwoFour54, which is backed by the Abu Dhabi government, provides a media-industry zone and facilities that are designed to attract local and international companies in order to encourage local content production. The TwoFour54 name refers to the geographical coordinates of the city of Abu Dhabi.

It is worthy of note that almost 60% of MENA inhabitants are under the age of 35, a statistic which has helped shape the popularity of certain content types. Furthermore, viewership increases significantly during the period of Ramadan, and programming output from the major broadcasters is scheduled to reflect this each year, not least in the production of soap operas, known as musalsalat.

Piracy
Pay TV growth in the Middle East in particular is restricted by the ongoing popularity of free-to-air (FTA) satellite channels. The vast number of FTA channels makes it difficult for legitimate pay platforms to establish themselves. Their rise has also promoted a cultural mindset that expects to receive a wide range of TV services without payment. This perception has also assisted the rise of piracy in the region. While most countries are at least making cursory attempts to tackle the problem, anti-piracy body the International Intellectual Property Alliance (IIPA) believes problems exist across the majority of the region.

Signal theft is a major problem in several countries. This practice includes illegal redistribution, decoder piracy, smart card piracy and the grey market. Other piracy problems include optical disc replication and internet downloads – especially of TV programmes that are yet to air. Since the Orbit-Showtime merger in 2009, OSN has been working on consolidating its subscription base and completing postmerger integration. With revenue being lost to signal theft via illegal Dreambox decoders, and after the failure of ‘confiscation operations’ in 2009, the company took a bold step to eradicate illicit use of the Dreambox via a swap-out of old set-top boxes for the ‘unhackable’ OSN Showbox HD. Transmission to the old set-top box was switched off in late 2010, reportedly disconnecting millions of pirate users.

OSN was expecting an increase in subscription numbers to result, with former ‘pirates’ signing up to legitimate subscriptions, and its ongoing subscriber increases suggest that is occurring. It has also reported a major improvement in churn levels since the move.

ART, meanwhile, despite taking a step back from direct supply to customers, has teamed up with Viaccess to provide additional protection for its Pehla pay TV channels, which have also been the subject of pirate activity. ADMC has an HD set-top supply deal with Humax. This ensures its soccer rights have strong content protection, but may hit subscriber growth as the public would prefer to buy a smartcard that can fit into existing settops.

Saudi Arabia is one of the worst transgressors for piracy. It has widespread pirate distribution of pay-TV via both cable and DTH. The problem is particularly evident in compounds, where a DTH smartcard is acquired centrally then used by the management of the compound to provide pay-TV services to hundreds or even thousands of homes via internal cable systems. The problem is difficult to tackle because the owners of the compounds tend to be influential, meaning there is little government action against piracy. In its 2012 report the IIPA noted that “piracy rates are higher in the Kingdom than in any other country in the Gulf region” and in view of the regime’s inaction in imposing deterrents, the IIPA recommended that Saudi Arabia be placed back on its ‘Watch List’ for transgressor countries.