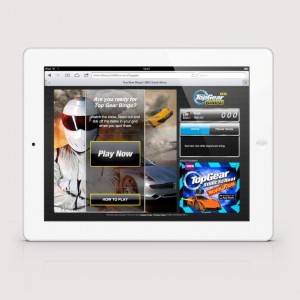 BBC Worldwide is to launch a second-screen app for Top Gear when the new series of the show is aired on BBC channels around the world next month.

Top Gear Bingo! was developed using UK-based Monterosa’s LViS platform, and encourages viewers to look out for well-known phrases, cars and items associated with the motoring entertainment programme, ticking them off on their screens in a similar style to a traditional bingo game. The free-to-play web app is accessed by logging into the local BBC channel’s website where viewers can invite friends to join them through Facebook, comparing scores while playing along with the live broadcast. A new game is available with every episode.

Duncan Gray, commercial director of Top Gear at BBC Worldwide said: “We wanted to create a free Top Gear game that enhances our international viewers’ enjoyment of the show’s premiere broadcast.  Top Gear Bingo! does just that, allowing fans to look out for words, phrases and items that appear, competing with their friends to see who can get the highest score each week via a leader board ifyou log in with Facebook. And we hope that the unique way we’ve been able to integrate advertisers into the proposition will be well received.”

Tom McDonnell, commercial director at Monterosa, said: “LViS is our versatile platform that allows us to quickly and economically develop fantastic second-screen apps that can live anywhere and scale globally. Working with BBC Worldwide, we’re giving fans a way to enhance their viewing experience and broadcasters a new way to activate sponsorships and to create additional advertising opportunities through the second-screen. It’s an exciting time for second-screen and we’re proud that LViS is becoming the best way to make and deploy global apps for mainstream TV shows.”