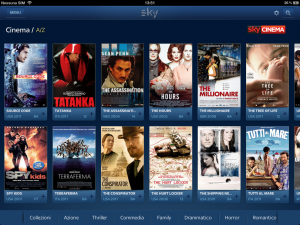 The, Sky Go Extra, also allows users to register for Sky Go on up to four, rather than the existing two, internet-connected devices.

Sky Go Extra, which is available for £5 (€6) a month, allows customers to download movies and TV shows on smartphones, tablets, laptops or Macs via WiFi to watch offline later.

According to BSkyB, this is the first time a service that allows users to download Hollywood movies and watch them offline has been available in the UK and Ireland. Sky Movies subscribers will be able to download film titles about six months after their theatrical release. Once downloaded, customers can store the films on their portable devices for up to 30 days. Titles such as Avengers Assemble, Sherlock Holmes: Game of Shadows and Pirates In An Adventure with Scientists will all be available for download through the service, alongside the entire James Bond film catalogue.

Customers will also be able to download shows from Sky Atlantic, Sky 1, Sky Living and Sky Arts, as well as partner channels such as Nickelodeon and Disney.