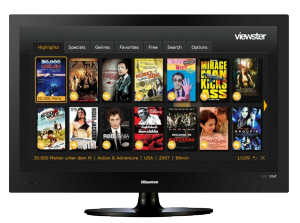 Switzerland-based OTT movie and TV service Viewster, which has passed one billion views this year, is ramping up its marketing activities.

Viewster has passed the milestone of one billion video views by users this year, and the company says it has seen its user base increase almost sevenfold in the last 12 months. The company earlier this month updated its service and introduced new mobile apps that allow offline viewing for iOS and Android devices.

Viewster has now hired a new head of marketing and launched its first formal marketing campaign – a trivia app on Facebook – as part of a broader push to expand its reach and use of the service. The app, Qster, will test viewers’ knowledge of movie scenes and include a leader board of players. The Facebook app is currently available on the web but will soon also be released on mobile platforms.

Tilman Eberle, the company’s newly appointed marketing and communications chief and former vice-president of corporate communications at Doodle, said the Facebook launch was the start of a broader social marketing campaign.

The company has not engaged in any real marketing activity to promote its largely advertising-funded service up to now.

“The Facebook app is the start for getting more social,” said Eberle. “We are investing in PR and in getting users to stay on our platform.”

Eberle said Viewster now had enough content to get viewers to come back again and again to the site and had a critical mass of users. “We are working on contracts to get more premium content. We are looking for new growth funding,” he said.

Eberle said acquiring new content would be key but the company would also use additional funding to ramp up its marketing activities to get new viewers. Viewster is currently available in 120 countries worldwide. Eberle said that it was looking at expanding its presence in Latin America to complement its presence in Europe and Asia. He said Viewster would also expand into new fields, without providing specific details. The company currently offers a range of movie and TV content free to view, with the option to pay a fee to see advertising-free versions of the content. Eberle said that while the free offering was going well, the company wanted to look to expand into more paid content and to launch further offerings that would leverage social networks. However, there were no plans to move into subscription offerings. Viewster sees itself as a ‘challenger’ brand and Eberle said this approach made it easier to reach a larger audience than if it offered a subscription launching.

In addition to its ad-funded content, Viewster offers premium movies from Warner Bros and other content suppliers in a number of territories including Germany.

An earlier version of this story said that Viewster planned to seek new finance. The company now says it has no plans to seek additional finance.