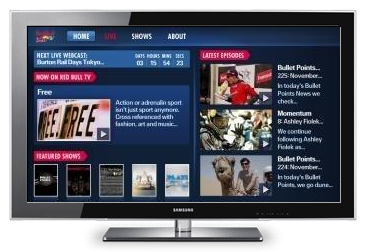 Smart TV apps that deliver video content are among the most popular for UK consumers, according to the Rovi Corporation Smart TV Advertising Study, which was conducted by Decipher Research with the support of media firm Red Bull Media House.

The Study surveyed 500 owners of Samsung Smart TVs and Blu-ray players and found that video content delivery apps, including BBC iPlayer, BBC News, LoveFilm, and YouTube, were among the most frequently used. The research also revealed that the average household with connected TV devices downloads at least nine apps.

As part of the study, Red Bull Media House teamed with Rovi to research how users react to advertising on connected TV devices that were designed to drive awareness and downloads of its new Red Bull TV Smart TV App. The campaign for the Red Bull TV App features banners within the content search and discovery areas of the Samsung Smart Hub. The adverts direct viewers to an interactive microsite where they can watch high-definition clips of shows available on Red Bull TV and directly download the app. The campaign, which runs through June, has generated millions of impressions for Red Bull TV and driven 81% higher interest in downloading the app within its target demographic, Rovi said.

“The Rovi Advertising Network enables advertisers to place dynamic, engaging ads in front of consumers as they search for meaningful entertainment across the many content sources and choices available to them on connected devices,” said Jon Hewson, advertising director for Rovi in EMEA. “As our relationship with Red Bull Media House attests, the Rovi Advertising Network is not only a great vehicle for media companies to better engage with consumers in the living room, but also an ideal tool for App developers looking to build an audience.”