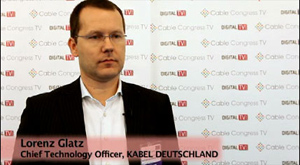 Despite the deployment of home gateways designed to enable movement of content between devices in the home, cable operators are still primarily delivering multiscreen content direct from the headend rather than around the home from the gateway device, ANGA Cable attendees heard this morning.

Speaking on the international technology summit at ANGA Cable this morning, Danish cable operator YouSee’s chief technology officer Jorgen Michaelsen said that YouSee had deployed a home gateway model for next generation services. However, Michaelsen said the gateways were communicating with services at the headend rather than with other in-home devices. He said that in-home connectivity was the aim but that YouSee had connected a lot of devices individually to the network and had yet to see large scale take-up of in-home networking.

YouSee’s addition of multscreen services was primarily to add value to its TV offering, said Michaelsen. YouSee has recently launched a TV Everywhere service and will launch new initiatives related to this soon, he said.

Speaking on the same panel, Kabel Deutschland chief technology officer Lorenz Glatz said that there was a need to eliminate complexity from the consumer experience. Connecting multiple devices was difficult and alienated many consumers, he said. Consumers should not need to worry about where content is coming from unless they have to pay for it, and content from all sources should be recommended via a unified user experience, he said. “What’s really important for the consumer is to keep it simple,” said Glatz.

Standardisation is vital for developing the connected home, said Martin Kull, chief technology officer of Swedish cable operator Com Hem, also taking part in the technology summit. He said Com Hem aimed to supply DOCSIS 3.0 modems to its homes, with 100Mbps emerging as a basic speed for most subscribers.

Kull said that Com Hem had launched a support service to deliver connected home support with a fixed price that is outside the operator’s regular support offered to all subscribers. He also said that the company had realised that in-home customer support did a better job of supporting and selling the company’s services and the vast majority of support was now in-house rather than outsourced.

Also speaking on the technology panel, Liberty Global’s chief technology officer, Europe, Aamir Hussain, said it was still not easy to move content between devices. One of the aims of Liberty Global’s forthcoming Horizon set-top box was to enable viewers to consume content on second screens, he said.