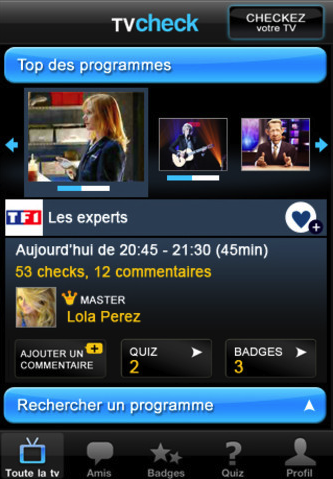 Orange its launching its interactive TV app TVCheck in the UK.

TV Check, which is available in France, lets users access interactive features and share what they are watching with friends on social networks, by holding a smartphone camera to the TV screen. The app automatically detects which show is airing and can direct users to content relevant to that programme.

In France, the app has been downloaded almost 100,000 times since release. In the UK, it will be free and available on any network. Orange said TVCheck’s social and interactive features, including gaming, can be adapted to the needs of broadcasters. It will be available across 25 free-to-air channels, including the BBC’s channels, ITV, Channel 4 and Channel 5.

Speaking to DTVE, Orange’s business development director David Nahmani, said UK TV viewers were well aware of social TV behaviour, with thousands of people Tweeting around popular shows such as The Apprentice and The Voice, for example.

“Social TV from a second screen perspective is quite nascent. We can already see a willingness from viewers to interact and play along with shows, and TVCheck is a simple way for them to do it,” he said.