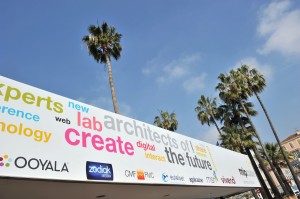 Interactive social TV applications need to be based on simple-to-understand concepts  and deliver an immediate reward, according to Josh Atkins, senior design director, Soho Productions, part of Microsoft Studios, speaking at the MIPCube event in Cannes at the end of last week.

Atkins was part of the team that developed a new interactive concept for Sesame Street, Kinect Sesame Street TV. Kinect provides a camera that can see in 3D and can provide voice and facial recognition. Animated shows can be programmed to react to human movements recorded by the Kinect camera. It can also show viewers in picture-in-picture on the screen. In the example shown at MIPCube by Atkins, two children’s reflection was shown in a mirror on TV held up by an animated character from Sesame Street, the Cookie Monster, giving the children instructions on what to do in order to see themselves in the ‘morror’.

According to Atkins, participation on the part of viewers needs to be optional, instructions on interaction need to be simple and the reward needs to be instantaneous and fun.Atkins said that the same interactions could be applied to exercise shows for adults as well as kids animation. Kinect has had over 200 children through its lab over the last 11 months testing concepts .

“The future of TV is inherently interactive,” said Atkins, who has a games background. “Useability is absolutely required for it.”

Atkins said Soho had developed other applications that could appeal to older kids, such as a game where they had to find a hidden object on screen.