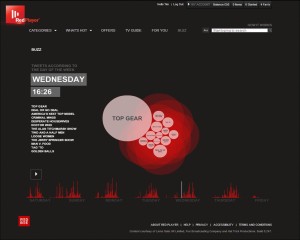 Media services company Red Bee has launched RedDiscover, a set of technologies brought together to provide an integrated TV guide incorporating a range of social networking and content discovery features.

Red Bee technology and innovation director Steve Plunkett told DTVE that RedDiscovery was an evolution of the company’s technology and metadata and its acquisition last year of TV Genius.

“We have a metadata base with 1,200 channels’ TV listings in 23 languages across Europe,” said Plunkett. “It’s Europe’s biggest metadata base.” He said the database include information about eight million titles over the last 15 years.

Plunkett said that the acquisition of TV Genius “gave us the intelligence and application logic that allows data to be represented on different kinds of devices in different ways”. He said that RedDiscover was focused on four key areas: recommendation, personalisation logic, EPG creation and companion apps. The platform can be used to create personalised EPGs that allow integration of images and video links as well as immediate access to social network-based commentary on shows.

The Time Out TV guide has been developed to harness the use of social media by consumers and will integrate traditional TV listings with social networks Facebook and Twitter, allowing users to engage with their friends and connections in real time. Users will be able to login, ‘like’ programmes and see what their friends ‘like’, share and recommend content and see what programmes are trending on Twitter, what’s being said about them and interact with the Twittersphere.

Veronica Publishing, which owns Veronica magazine, the leading TV listings magazine in the Netherlands, is rolling out the new social TV guide nationwide via tablets and smartphones and will showcase functionality including: the ability to ‘check in’ via Facebook, ‘like’ programmes and see what friends ‘like’, with Twitter integration to see what programmes are trending in real time and allowing users to interact with connections, and the ability to search, share, rate and recommend content across Facebook and Twitter.