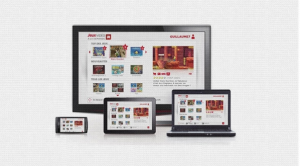 Games are available via a games-on-demand icon or via channel 70 on Neufbox TV. Users can begin playing immediately, without the need to download. As theservice is cloud-based, users do not need to acquire a console, PC or additional software and the operator said the entry price would be kept low.

SFR is currently offering a catalogue of about 80 games across four categories, ranging from casual games including 7 Wonder, Peggle and 4 elements, ‘gamer’ titles including Trine, Broken Sword and Shadowgrounds, and kids games including Kirikou, to simulation titles aimed at a broader audience including Farming Simulator, the bestselling PC game in France in 2011.

Users can play using the Neufbox Evolution remote control, SFR’s dedicated games controller or one of a number of PC games controllers. Games are available from €1.99 to €2.99 for a single play, or via one of two subscription offers, for €4.99 for casual games only, or €9.99 for the full catalogue. Users can also transfer the game they are playing from the TV to the PC, and SFR plans to introduce the ability to play on smartphones or tablets that can be used in conjunction with the Neufbox Evolution later this year.