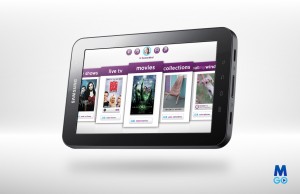 Technicolor has used the CES show in Las Vegas to launch M-GO, a new consumer brand that will allow users to combine media including movies, music, apps and live TV in one cloud-based location.

Technicolor plans to launch the service in the US this spring before launching it internationally next year.

Technicolor has struck strategic relationships with Intel and TV manufacturers Samsung and Vizio to support M-GO, which will feature a discovery engine to enable consumers to access content online. The M-GO app can be used on smartphones or connected tablets, which can then be used to view TV or as companion devices.

Through the relationship with Samsung, M-GO will come pre-loaded on Samsung’s 2012 Smart TVs and Blu-Ray Disc players and will be accessible on Galaxy tablets. It will also allow users to get access to bonus content including deleted scenes and games on connected Galaxy devices while watching movies on TV.

M-GO will also come pre-loaded on Vizio TVs, tablets, Blu-Ray players and stream players that are part of the Vizio Internet Apps Plus ecosystem.

The relationship with Intel will make M-GO available on Intel Ultrabooks devices through the Intel AppUp centre, bringing HD digital content for TV, movies, music and apps to Ultrabooks and other Intel-based devices enabled by Intel Insider.

John Batter has been named as CEO of M-GO. “We could not be more thrilled to be partnering with the leading technology brands to deliver the best and most immersive experience regardless of where, when, and how media is consumed,” said Batter.