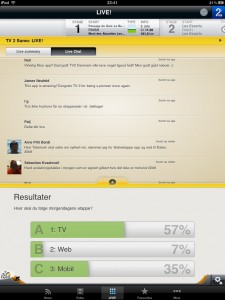 Norway-based TV, outdoor and mobile branding technology specialist never.no has announced that its Interactivity Suite (IS) has enabled the world’s first live synchronised companion app for iOS and Android devices.

Broadcaster TV 2 Norway used the IS’ new Synchronised Companion App Framework during its live coverage of the Tour de France to enable a complementary and immersive two-screen experience. The number of app downloads increased by 267% from 2010, while the number of paid VOD users increased by 533%.

The Synchronized Companion App Framework enables content to be delivered to a tablet, mobile device, or PC in sync with the action on the viewer’s television screen. TV 2 developed companion apps especially for the Tour de France, which viewers downloaded to their iPhone, iPad or Android devices before or during the race. Then, using never.no’s IS as a framework, TV 2 pushed moment-by-moment stats and other information to viewers to complement what was happening on the TV screen. never.no’s technology allowed producers in the studio to use the apps to interact with the audience via chat and viewer polls relevant to live events.

“There has never been a better way to provide a fully immersive two-screen experience, which enhances, rather than distract from, our core programming,” said Morten Jørs, managing editor of TV 2 Sporten. “The fact that we now have a tool that allows us to add value and engage our viewers as the action unfolds opens up a whole new world in terms of gaining and retaining audience share.”

Never.no will be exhibiting at IBC on Stand 3.A36